What an honor! Michel Rabagliati, who’s is now a very established cartoonist has recently launched his 6th book called Paul A Quebec. In this book Michel decided to immortalized “me” as one of his characters, Brenda Steinberg.

Brenda, a fun out going, quick talking agent with her hair blowing in the wind as she talks on her cell phone in the car, securing contracts for “Paul Baby” on the way.

This series of comic books have been documenting the life of Paul (actually Michel from his early and humble beginnings growing up in Montreal). Each book deals with a different aspects of Paul’s life and experiences and I was lucky enough to have worked with him when he was at his peak of his illustration career.

Michel is a Canadian cartoonist born and based in Montreal. He is published by Drawn and Quarterly in English, and La Pastèque in French. Michel has written and illustrated several semi-autobiographical comic books each furthering the life story of his protagonist Paul. The series includes Paul in the Country, Paul Has a Summer Job, Paul Moves Out, and Paul Goes Fishing. In addition; Rabagliati has published shorter stories featuring Paul including “Paul in the Metro.” Michel started drawing comics in his 40’s, after working as a graphic designer and illustrator for many years. It was then that we met or should I say when I went after him.

I had the pleasure of representing Michel Rabagliati as he was slowing moving up the comic ladder. He eventually decided to stop illustrating all together and concentrate on his comic books. As sad as I was to see him go, I knew that he made the right decision. There is nothing more important in life than to follow your dreams and that is exactly what I told him. At the same time, Michel was doing really well with his illustration career and we were keeping him busier then I think he expected or wanted to be for that matter. All I can say is, that I was really thrilled to see that Michel thought highly enough of me and our relationship to portray me in his book. 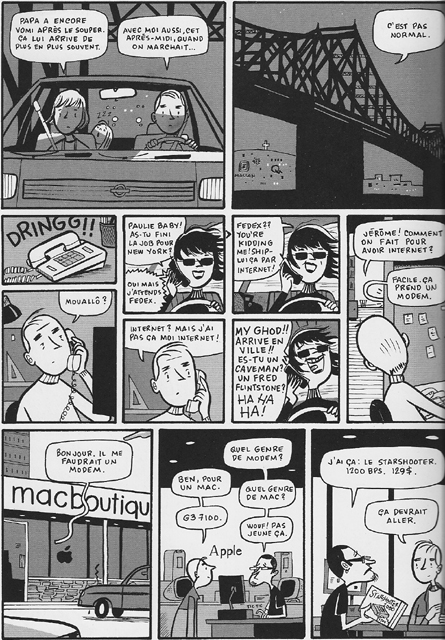 Although I was really sad to see Michel leave Anna Goodson Management several years ago I never doubted for a minute that he would not succeed. I guess I always knew that he would triumph because drawing his comics is what made him happy. And when you are happy at what you do, you always come out on top.

To learn more about Michel Rabagliati and his comic books about Paul, Go to drawnandquarterly.com

One thought on “Michel Rabagliati’s Paul A Quebec”